This past week, I had the pleasure of accompanying three different artists over the course of three days at the OpenMind Festival in La Patrie, Quebec. OpenMind Festival is a music festival, bringing people together in a celebration of diversity and sound ecological practices. The festival takes place every two years, and in a different location that is always very isolated (no cell phone coverage this year!) and very beautiful. You may remember my performance with Uwe Neumann from the last OpenMind Festival, in 2011.
My first performance at this year's festival was an early evening concert with sitarist Uwe Neumann. I accompanied him in raag Kirwani, in Sitarkhani, followed by another raag in Rupak, the name of which has slipped my mind, and lastly, a Bhairavi in Teentaal. We concluded with Uwe's customary finale - an improvised piece on sansa. 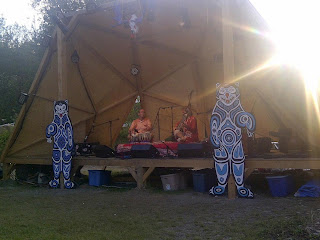 Next was a noon concert, accompanying santoor player Jonathan Voyer. Our outdoor performance was quickly rained out (Jonathan didn't even get to finish his alap), even though Jonathan had specifically decided NOT to play raag Megh (a monsoon raga, which would have been appropriate, considering the OpenMind theme of the day was water), and instead opted for Bhimpalasi. Well, raag Megh or not, the rain came down hard! The tech crew quickly scrambled to move us and all the equipment into ... how to explain ... an enormous, inflated white ball, with carpets and pillows laid out on the inside. It was a really nice, intimate setting for the music, but also incredibly hot! Jonathan wrapped up his alap, and we moved on to compositions in Rupak and Teentaal. It must have been 40 degrees (C) in there, no exaggeration. Nevertheless, we brought full energy (and lots of sweat!) to the performance, and the audience was extremely receptive. 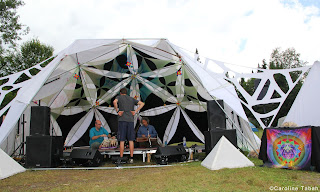 Photo from soundcheck. No more photos from the outdoor stage, as it soon started to rain! 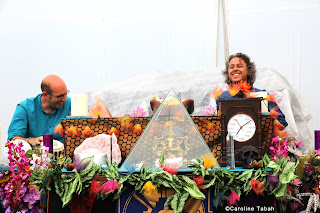 Inside the big inflated white ball. The stage was unfortunately placed behind an altar, as you can see here.
Last, but not least, was a sitar performance with Toronto-based musician, Prosad. This was actually our first time meeting and playing together. Prosad has studied with musicians in both the Vilayat Khan style and Ali Akbar Khan style of playing, and so his approach was quite different from the Montreal-based musicians that I usually play with. It was great fun to follow and see where he might lead me. Lots of fun rhythmic interplay and intricate tihais! 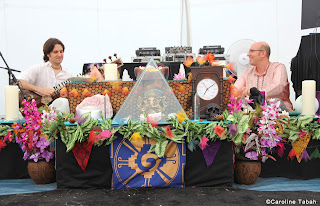 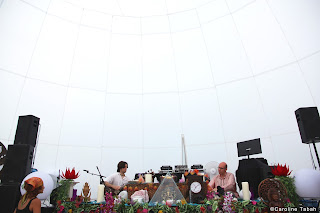 Again, in the ball, and hidden behind the altar!
Overall, a great three days of tabla accompaniment! Thanks to Caroline Tabah for most of the photos, aside from the few cellphone shots. :)