The North Indian tabla is a special and unique instrument that has become an important part of my life. I have chosen to concentrate my studies on the Benares baj (style). Click here for some information on the Benares gharana.

The tabla is the most popular percussion instrument in India. It is especially prevalent in the northern regions of the country, as well as in Pakistan. The tabla can be heard in Indian classical music, dance, religious, folk, and film music, as well as in modern-day fusions. The tabla is an integral part of North Indian classical music, where it can be performed solo, in dance accompaniment (kathak), or to accompany melodic instruments (sitar, sarod, voice, violin, etc…). The instrument dates back approximately 400 years, though it is descended from drums that have a history dating back over 2000 years. There are six different stylistic schools of playing (gharanas), many varied techniques, and a repertoire made up of a multitude of cyclic and cadential compositional forms. 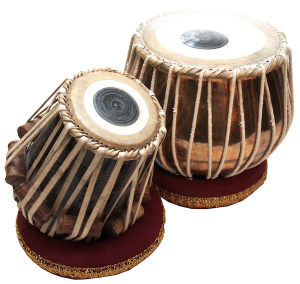 The tabla has traditionally been taught through an oral tradition, from teacher to student, a system referred to as guru-shishya-parampara. Different regions of India developed their own styles, resulting in what we now refer to as the six major gharanas of tabla; Punjab, Delhi, Ajrada, Farukhabad, Lucknow, and Benares.

Compositions are learned through a system of bols - oral representations of the sounds themselves; a sort of solfege system for drums. Through the system of bols, one can recite, notate, or read any combination of sounds on the tabla in one single line of text; the sounds of both drums can be expressed either individually, or when two sounds are produced at once, simultaneously.

I like to break down the main sounds into resonant and non-resonant categories, as follows:


These are then put together to form compositions, for example:

As a musician with a background in both Western classical and Indian classical music, I have long been working to bring the two together by commissioning new works for tabla from composers of new music. For a selected list of repertoire, click here. If you know of any other works for tabla, or if you are a composer who may be interested in writing for tabla, please contact me. I look forward to hearing from you on the subject!