This past Saturday, September 7, I had the great pleasure of playing with one of my favourite bands, Elsiane, at the Cabaret du Mile End in Montreal. Elsiane is made up of Elsieanne Caplette, who is an amazingly talented singer and composer, and drummer Stephane Sotto, who has a super-solid groove, and loads of serious creativity in his playing. I highly recommend checking out their website, and having a listen to their two albums. 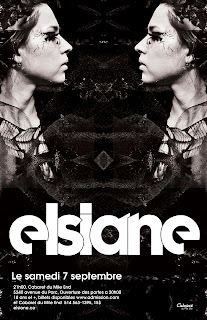 I was invited to be the opening act, and then later to play with the band as a guest musician. Other guests were violinist Stéphanie Caplette, oboist Annick Beauvais, and bassist Patrice Agbokou.
For the opening tabla set, I wanted to do something completely different from my usual tabla solos, and something that would fit with the Elsiane sound. Elsieanne generously composed two amazing backing tracks for my opening tabla set. The first was an elaborately textured drone, over which I played introductory materials, including Benarsi theka, followed by angrusthana. The second track had a drum groove in a medium 12-beat cycle, which I matched with an improvisation in Ektaal. This then transitioned into a duet with Stephane, which we had great fun in creating and in performing! We were eventually joined by Elsieanne and her quijada (a percussion instrument made of a donkey's jaw; the ancestor of the modern vibraslap), and began the Elsiane portion of the show with their song, Paranoia. I got a serious baya workout with the groove that we worked out for this tune, which has got to be one of my favourites that we collaborated on.
I re-joined the band at different points in the set to play tabla on Distance, Underhelped, and In the Shadows. The tabla fits their music so well, so naturally. I'm sincerely looking forward to more collaborations with the band in the near future!
I was really impressed with how dedicated Elsieanne and Stephane are to their music, and the incredible team that they work with. Rob Heaney making everything sound so good, amazing lighting and stage design by Karine Gauthier, and also people helping out with hair and makeup (for those with hair, hahah!). When Elsiane puts on a show, it's not just a concert; it's an experience.
Thanks to Caroline for the photos!