This past March, I was invited to perform a tabla recital in Pontio's Music@Bangor series, in Bangor, Wales, UK. I was in residence at Bangor University for a few days, where I rehearsed with local musicians Andrew Woolley and Josephine Wilkin in preparation for the recital. I also gave tabla workshops at the Pontio shop, at Bangor University, and at Ysgol Friars school.

I have to say that Bangor is a beautiful city (feels more like a town), with amazing mountain and coastal views. Everyone was so friendly and welcoming, and my time there just flew by.
My first activity was an Indian rhythm workshop at the Bangor University School of Music. My goal here was to rhythmically challenge the students, and to provide them with some strategies and solutions for approaching complex rhythm. All using concepts from tabla, of course. 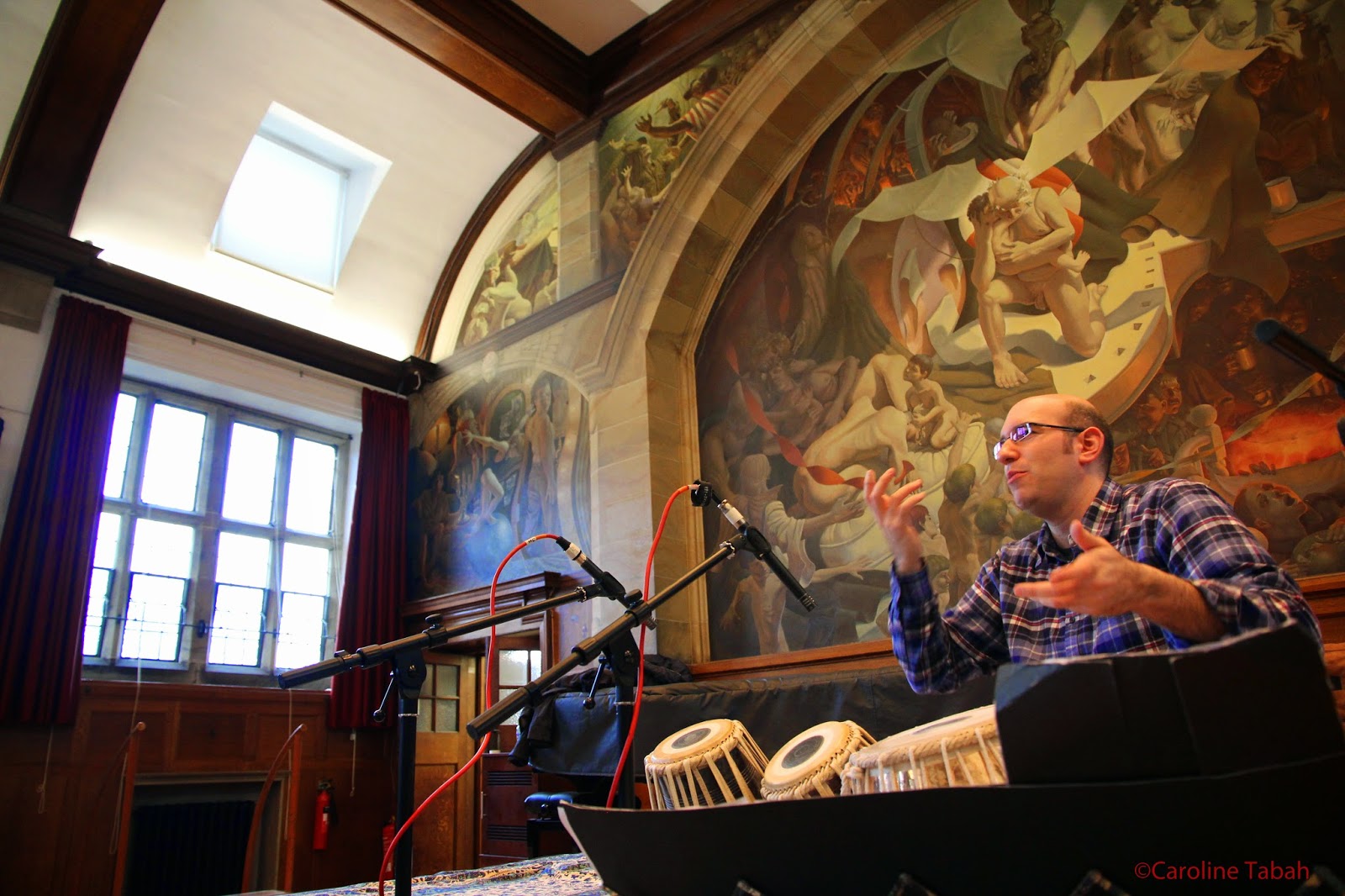 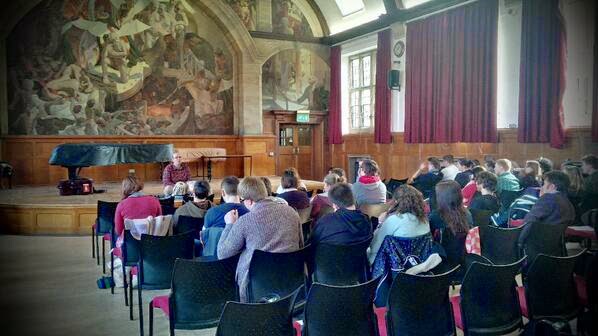 I also gave a 'Taste of Tabla' demonstration at the Pontio shop. The shop is Pontio's publicly accessible office space, on Bangor's high street. The shop will often host small, intimate events, as a way of publicizing upcoming concerts, and as a way for performers and audience to interact. It's a great idea, that more arts organizations should imitate. 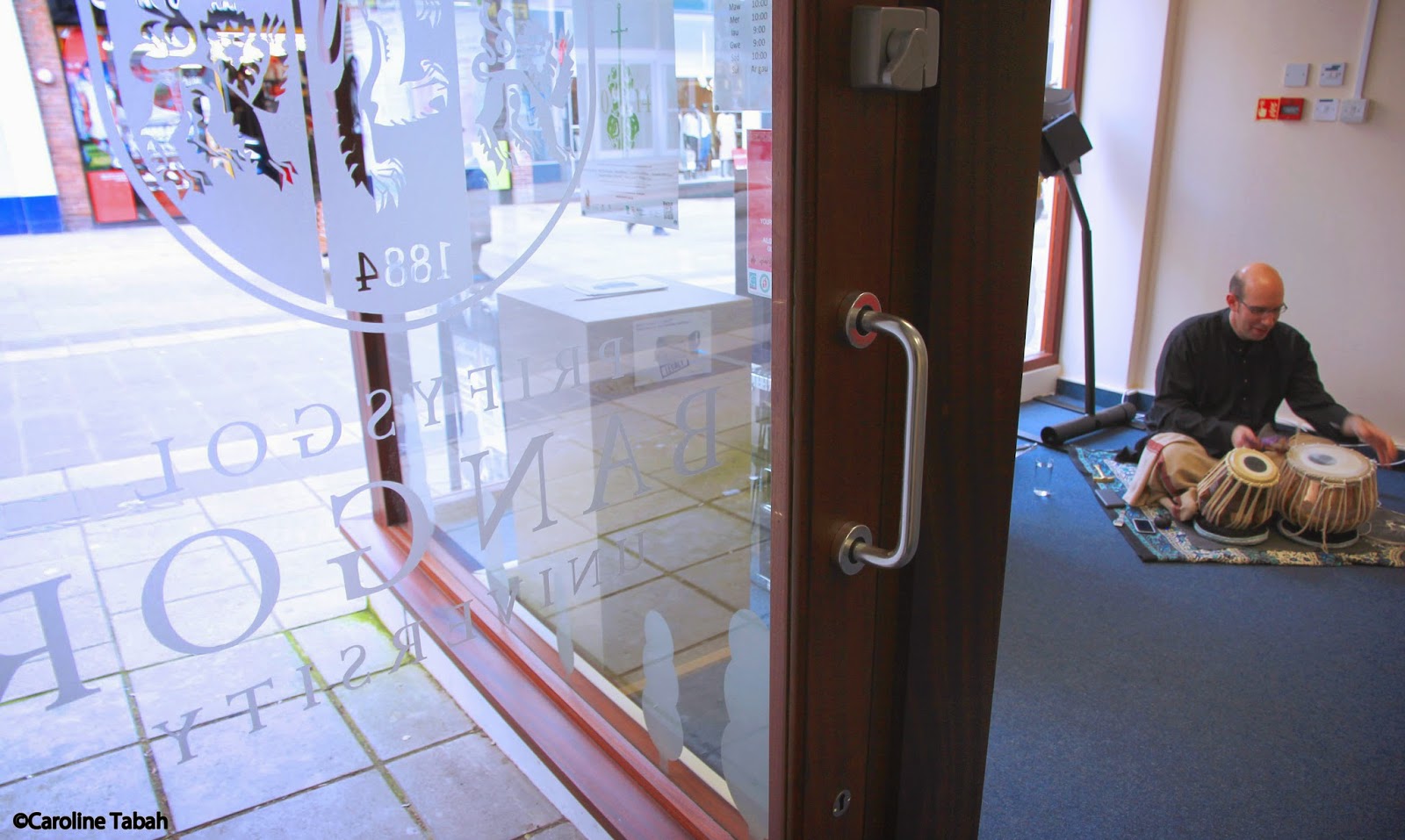 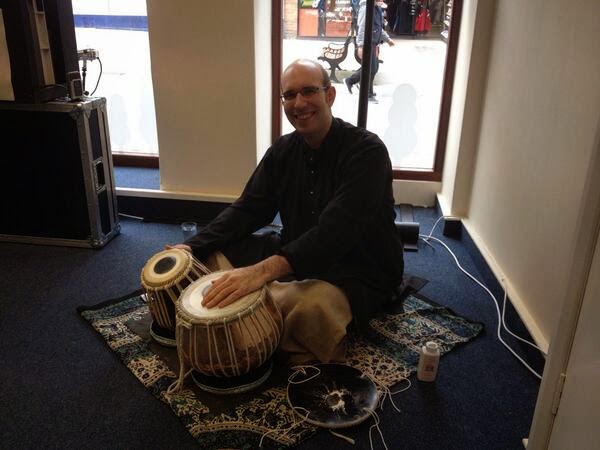 For the tabla recital, I performed a number of works for tabla by Canadian and American composers. As I typically do, I opened the recital with a traditional tabla solo in Teentaal, as a way of showing the tabla in its traditional setting, and showing the depth and beauty of the repertoire. Something different this time around was the accompaniment, since no harmonium was available locally, I was accompanied by Andrew Woolley on an old electric organ! In the context of this concert of new music, it worked quite well. I then followed with Bruno Paquet's Les arbres célestes, for tabla and fixed media, inspired by Quebec's ice storm of 1998, and then Payton MacDonald's Alap, for solo tabla. 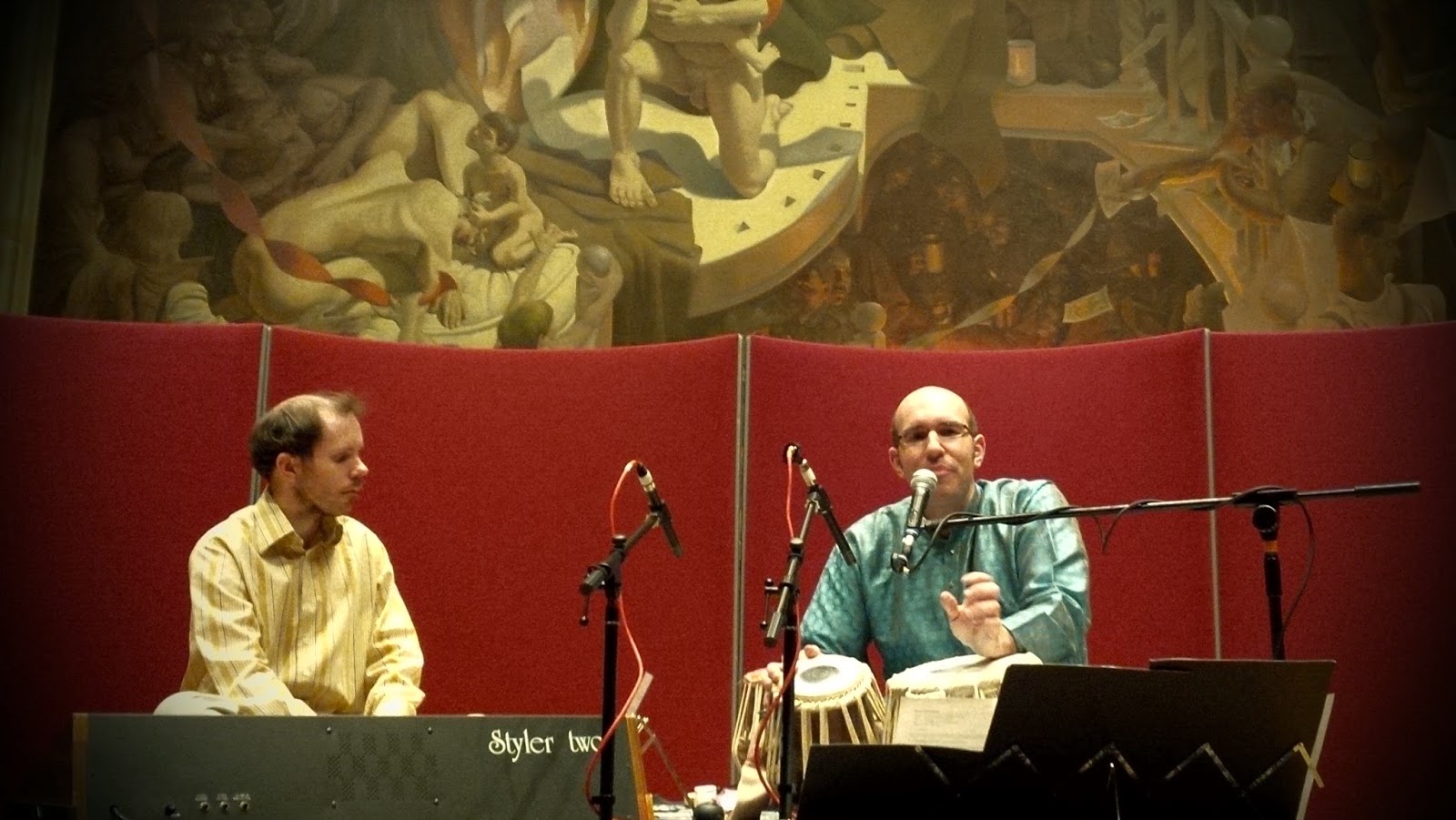 The second half began with Paul Frehner's Ke-Te for solo tabla, followed by the UK premieres of my composition, Bol, which is based on traditional bol paran compositions, and Tawnie Olson's provocative new piece, Something to Say, for tabla and fixed media. The concert concluded with Jim Hiscott's Shadow Play, for which I was joined by talented flautist, Josephine Wilkin. 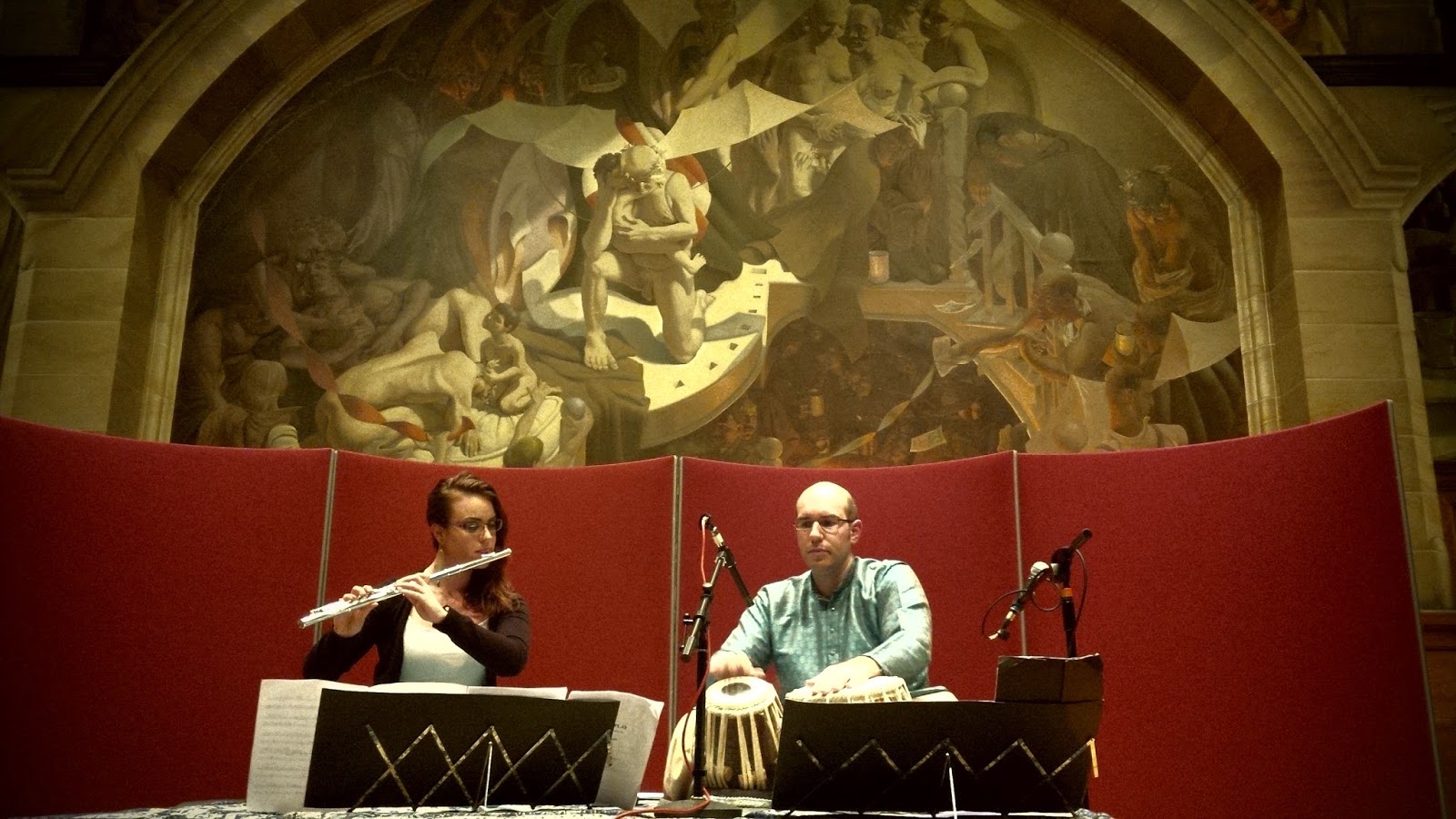 On my last day, I gave a second 'Taste of Tabla' workshop, for a small group of very enthusiastic music students at Ysgol Friars high school. They had an excellent sense of time, and clapped taal quite expertly! 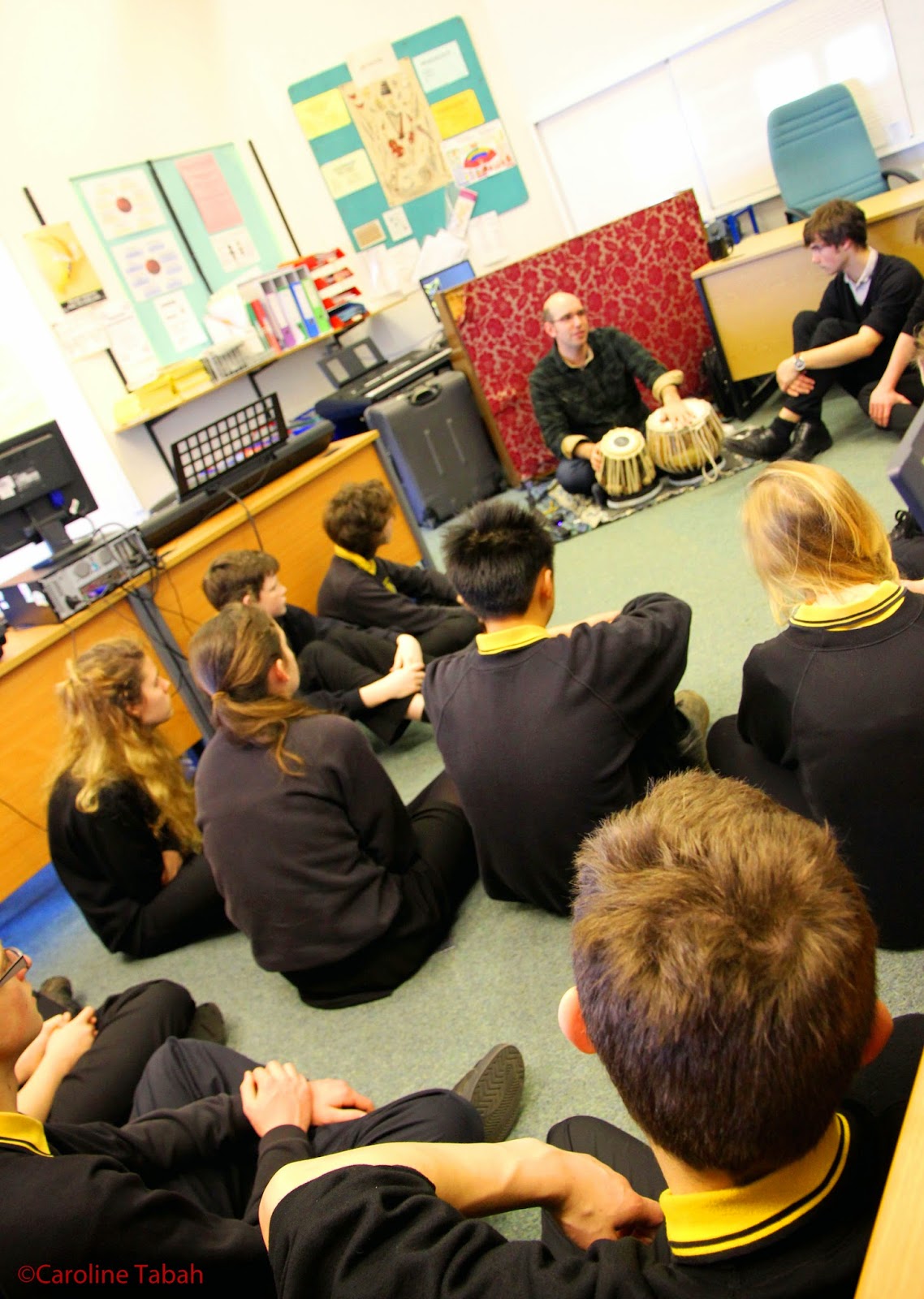 Many thanks to Xenia Pestova and Pontio for having invited me to Bangor. I hope to return soon!

Thank you to Caroline Tabah for the photos! For additional photos, please visit the Facebook album.