Kirtan at the Wanderlust Festival in Mont-Tremblant

Mont-Tremblant is a beautiful ski resort in the Laurentians, about 90 minutes north-west of Montreal. When I think of Tremblant, I think of outdoor sports, like skiing, showshoeing, hiking, mountain biking, and so on. But yoga? Not really. But somehow, it happened. This past weekend, the Wanderlust Festival was in full swing. The village itself was the same, but rather than seeing the usual mountain bikers and hikers, the pedestrian streets were full of people with yoga mats strapped to their backs. There were vendors with coconut water, kombucha, fresh juices, yoga clothes, etc. The whole vibe of the village was quite different from the usual. Tremblant was most definitely transformed.
I was there to accompany Lea Longo for a kirtan, along with Rad Crasto on guitar, Marcelo on bass, and Genevieve on backing vocals. Though there were numerous yoga classes and activities going on all around, when I walked out in my white kurta-pyjama (traditional Indian clothing) for the kirtan, I could feel that many curious eyes were upon me. I was definitely feeling somewhat out of place, as no one else was wearing Indian-style clothing (aside from a couple of Indian families that joined in the kirtan), but rather, athletic-style yoga clothing was the primary outfit of choice. Aside from the few odd looks I received, people were very open-minded, and there was a very strong sense of community at the festival. During the soundcheck, people started to gather around, and once we started, more and more people came and joined in. After about 30 minutes, I'm sure that there were at least 150 people around the stage, with most of them singing along. Not bad! 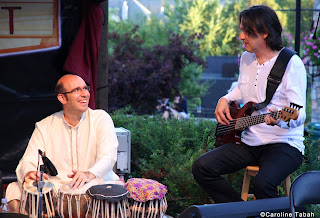 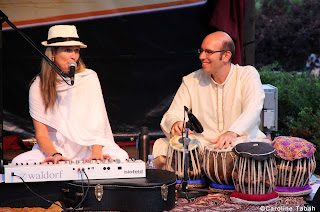 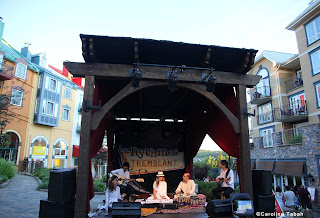 We had fun, and people enjoyed! Until the next time!

Thanks to Caroline for the photos!